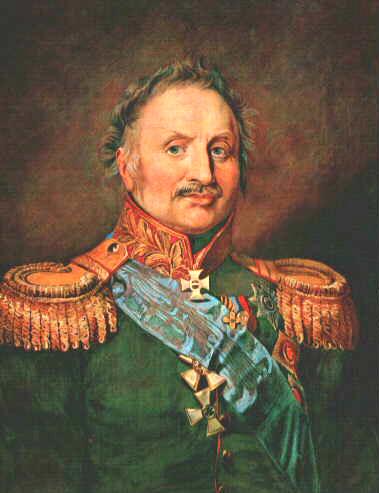 Count Field-Marshal Petr Christianovich Wittgenstein was born in 1768, he was a descendant of an ancient German family. He began his milirary service in the Guards, in 1795 he was a volunteer in the Corps of Derfelden in Lithuania and distinguished himself in the battle at Ostrolenka and the assault of Prague. Then he served in the Caucasus, took part in seizing of Derbent and after if was sent to St.Petersburg with the keys of this captured city.

In 1800 he was appoined the commander of a regiment, but in January,1800 he was dismissed and in November he got a regiment again (the Elizavegrad Hussar regiment). He took active part in the campaigns of 1805-1807.

In the war of 1812 he commanded the 1-st Infantry Corps and on June,15 he met the Frech at Vilkomir. During the retreat of the Russian Army from the fortified Drissa camp Wittgenstein with the Corps numbered of 20,000 covered the ways to St.Petersburg and acted against the Corps of Oudinot and Macdonald and was wounded in the battles of Golovchitsa and Polotsk.

On July,18 (30) the vanguard of Wittgenstein's Corps under the command of General Kulnev attacked the French at Yakubovo in spite of their superior forces. During the battle Verdie's Division came to the aid of Legrand, but two Russian chasseur regiments and a horse artillery company came to reinforce Kulnev's forces.

The Russians attacked again the next morning . Marshal Oudinot moved his reserves against the centre and left flank of the Russian troops, but the Russians repulsed them successfully with heavy and accurate artillery fire, further confusing the French. The Russians troops then attacked the French swiftly along the whole line, overrunning them and hurled them back to Kliastitsy.

The attempt of the French to organize an active defense on the right bank of the Nisha river had failed.

In the battle at Kliastitsy the 2nd battalion of Pavlovsky's grenadier regiment distinguished itself most of all.

The grenadiers "passed under the strong enemy's fire along the flaming bridge" and forced the French out of the town with bayonets. The Pavlovsky regiment had a glorious history and battle tradition. Men who were tall, brave, and skilled in military service, were chosen for the grenadier detachments. Grenadiers usually protected the flanks of the regular troops. They were armed with smooth-bore guns and half-sabres, and wore a high cap - "mitra" with a copper frontal part with the double-headed eagle on it. At the beginning of the 19th century in the other grenadier regiments, the mitre was replaced by a shako. But these changes didn't concern the Pavlovsly regiment, because Alexander I wanted to reward "courage and bravery of the regiment in many battles" and ordered it to retain the caps "in such condition as they were after the battle, and if some of them are damaged, it'll be the memorial of distinguished courage..."

After the falling of Moscow Wittgenstein reinforced his Corps with 40 thousands of militiamen of the St.Petersburg Militia and at October, 7 seized Polotsk and on October,18 defeated the united Corps of Victor and Saint Siere and after it went to join Chichagov's troops and took part in pursuing of the French Army after the Berezina battle. At February, 27 , 1813 he entered into Berlin defending it of the troops of Vice-King Eugene.

After the death of Kutuzov Wittgenstein was appointed the Commander-in-Chief of Russian and Prussian Forces, but after the unsuccessful battles at Lutzen and Bauzen he handed over the command to Barclay de Tolly. He took part in the battles at Dresden and Leipzig.

After entering the Allies into France he was defeated in the Nancy battle and in the battle at Bar Sur Aube (February,15, 1814) he was heavily wounded.

In 1818 he was appointed the commander of the 2-nd Army and in the beginning of the Turkish war he was a Commander-in-Chief of the Forces in the Europian part of Turkey, but in 1829 he was dismissed for reasons for health.

In 1834 the Prussian King gave Wittgenstein the title of High Prince.