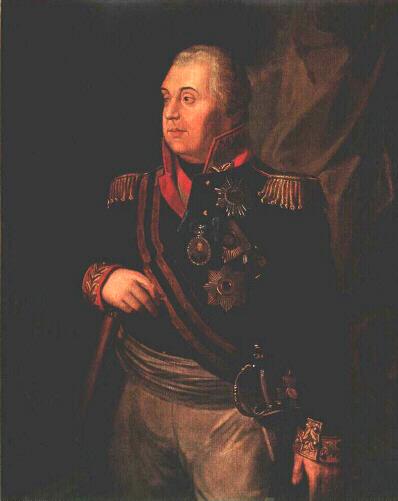 Under Peter the First all noblemen must serve in the Army and teach their kids science of war. Afther Peter's death when a son was born in a nobleman's family he was usually enlisted on military service as a private, and for the years of his boyhood he "was on home leave" and got the ranks year by year. But, for luck, not all the noblemen do the same.

So young Kutuzov, who had the excellent training had been distingushed at once among the other cadets of the Artillery-Engineer School.

In the age of 19 ensing ("praporshik") Kutuzov began his military service.

As long ago as the beginning of the XVIII-th century the danger of the Swedish or Turkish invasion into Russia became very strong. These countries didn't want to allow Russia to the Baltic and Black Seas, and besides they had their own predatory plans. So the main for the Russian foreign policy of those times was the struggle for independence and way out to the seas.

In 1764 when the Russian troops went to Poland, captain Kutuzov achieved his transferring to the acting Army. In 1764, 1765 and 1769 he took part in some small combats, got used to the field life, but as he said afterwards "he didn't understand a war yet".

In 1770 Kutuzov was transferred to Rumyantsev's Army that was acting against the Turks in Moldavia and Valakhia. Kutuzov was in the Corps of very skilled General Bour, that usually executed the most important tasks in every battle. After Kutuzov was appointed the Army Ober-Quartermaster.

But his service in Rumyantsev's Army had suddently stopped. Somebody of Kutuzov's ill-wishers informed Rumyantsev against Kutuzov, that he had copied his manners and his walk. The Commander-in-Chief was very touchy and young Kutuzov was saved from Rumyantsev's anger only by his military merits and excellent service. He was transferred to the Crimean Army.

This event made a deep trace in Kutuzov's soul. From that time he became reserved and distrustful. In the battle at Alushta Kutuzov was seriously wounded. A turkish bullet hurted his head, but for luck it didn't touch the brain. Kutuzov had recovered . Ekatherine II gave him a leave for treatment.

He went abroad for treatment. He travelled a lot over Europe, for a long time lived in Leiden, it was a big centre of science then, he met with many European scientists and generals there - Frederick II and Laudon.

After coming back Kutuzov was appointed to the troops that based in the Crimea. And A.V.Suvorov served

there then. Kutuzov comprehended the scence of forming columns for campaign, organization of march, rest and all Suvorov's science of training troops. Those days he was appointed the commander of the Bug Chasseur Corps.

In 1787 the new war with Turkey began. Kutuzov with his Corps protected the Russian border along the Bug, then his troops were included into the acting Ekatherinoslav Army. The commander of this Army was Potemkin. He decided to seize Turkish fortress Ochakov on the Black sea coast. The Russian troops and Kutuzov's Corps among them layed siege on Ochakov. The siege lasted very long, Russian soldiers loss their lifes because of many diseases. There was very little of military actions: only small affairs, Potemkin didn't decide on the beginnig of the main assault.

During one of turkish sallies they attacked the chasseurs of the Bug Corps. In this combat Kutuzov was heavily wounded. The bullet had pierced his had almost in the same place that at his first injury. The doctors thought the wound was fatal but Kutuzov began to recover, though his right eye didn't see from those days.

Afterwards Kutuzov took part in the storm of big Tukrish fortress Izmail under the command of Suvorov. After seizing Izmail Kutuzov was appointed the commandant of Izmail and the commander of the troops located between the Dniester and the Bug.

From 1793 the new stage of Kutuzov's life began. He became a diplomat: the Russian Ambassador Extraordinary in Turkey, in Kostantinopol (Istanbul), and showed himself as a very talented diplomat.

But he was on this post for a short time - till 1794, then he was appointed the Director of the Land Cadet Corps, where he managed training of the future officers of the Russian Army. Kutuzov delivered lectures to officers by himself and he for the first time began to teach tactics in the Corps.

In the same time Kutuzov was the Commander-in-Chief of the Land Forces in Finland.

After the death of Ekatherine II, Paul the First ascended the throne, and he established the Prussian rules in the russian Army. The soldiers were dressed and armed in Prussian style, and the main thing in the Army became not a war but a lot of parades. Many officers who fought under the command of Suvorov had sent in their papers.

In 1801 Paul was murdered and his son Alexander became the Emperor. But the conditions in the Army didn't change to good. There was some reforms but they were only about pensions and party about economical side: training and battle training stayed at the same level. Michail Illarionovich Kutuzov like many of Suvorov's officers was out of business. For about a year he was the General-Governor of St.Petersburg, but Alexander I was displeased with "carelessness in police service".

In August of 1802 Kutuzov was dismissed under his own "petition", but in real he was just removed from St.Petersburg. Kutuzov went to his village Goroshki in the Volin gubernia.

In 1805 Russia was for the first time threatened with danger of Napoleon's troops invasion. Austria and England too were in a very hard situation. And the coalition of England, Russia and Austria was formed against Napoleonic France.

Emperor Alexander was mede to apply to Kutuzov and ask him to command the united Russian-Austrian Army that would have to move to France.

On November 20, 1805 (December, 2 - new style) at the Czech town of Austerlitz a big battle took place . Alexander I commanded the Russian Army, although the Commander-in-Chief nominally was Kutuzov. Alexander was afraid of Napoleon very much but tried to look brave.

Alexander's calculation was very easy: if the battle had been won he would be the glorious winner, if no, Kutuzov would bear the responsibility for it.

Kutuzov's experience said him he had to refrain from offensive activities. But there was a lack of food in the Russian camp and it was necessary to make a decision. There was a war council and Kutuzov declared for the retreat to the Rudny mountains and waiting for approaching the reinforcements and also he proposed to wait till Prussia would enter into the war, but his proposals were rejected.

Just before the Austerlitz battle a disposition was made.Kutuzov realized the disposition didn't conform to the place relief and didn't take into account the real distribution of French troops, but he knew Alexander would not take any objection and kept silence during all the council, he was just napping.

The battle began at 7 a.m. Napoleon waited till the allies of Russians went away from the Pratzen Hills and ordered to the part of his troops to begin an attack. On the direction of the main attack Napoleon had the decisive outnumber of forces and it had decided the outcome of the battle.

The right flank was attacked by the Corps of General Lannes and the forces of Bernadott and Murat. They met with the Guard Cavalry of Tsesarevich Konstantin Pavlovich and a part of the Cavalry of Liechtestein.

But the cavalry didn't stand the fire of the French artiilery batteries from the Pratzen Hills and was made to retreat to Austerlitz. And only the attack of the Horse Guards Regiments helped Guards to avoid the utter defeat.

The crushing of Allies in the centre and on the left flank made Bagration to retreat to Rausnitz, and the Guards - to Austerlitz. On February,24, 1806 Alexander I rewarded Kutuzov with the Order of St.Vladimir of the 10st Class, but Michail Illarionovich realized the result of this battle deprived him of the Emperor's favour.

In 1807 Russia had to make a peace treaty that was signed in Tilzit and was called afterwards "the Tilzit peace". In had been acting till 1812.

In spring of 1809 the military actions against Turkey began again. The reason was the Serbian uprising against Turkish janizarys Russian supported the Serbians.

That time Kutuzov had been in the Moldavian Army for a year. The Commander-in-Chief was General-Field-Marshal A.A.Prozorovsky.

After the unsuccessful assault of Brailov fortress the terms between Kutuzov and Prozorovsky became very bad. And Prozorovsky removed Kutuzov from the Army. Michail Illarionovich was appointed the Lithuanian Military Governor and went to Vilno on June, 16, 1809.

After two weeks Prozorovsky had died, and Bagration became the Commander-in-Chief of the Moldavian Army. Under his command the Russian Army began to act more active, it occupied Moldavia and Valakhia, layed siege to Izmail and Silistria. But the campaign of 1809 didn't get good results, and the Army had to raise the siege of the fortresses and move into Moldavia and Valakhia.

The new Commander-in-Chief was Count N.M.Kamensky (the 2-nd), who has distinguished himself in the Swedish campaing.

But after a short time Kamensky fell ill and Aexander I appointed Kutuzov the Commander-in-Chief of the Moldavian Army.

At April,1 Kutuzov took up the command of the army. He at once began to make a close study of the situation and Army conditions. Kutuzov decided not to confine to the defence of the Danube but to advance from Rushuk.

Here Kutuzov showed his diplomatic talent and resourcefulness. At last the plan of military actions of the Turkish Commander-in-Chief (the Grand Vizier) became known to him. The Grand Vizier at last decided to move his main forces to Rushuk, seaze the fortress and go to Valakhia.

After knowing about the Vizir Army moving, Kutuzov with the Corps of General Langerone went to Zhurzha, crossed the Danube and stayed near Rushuk "back to this river".