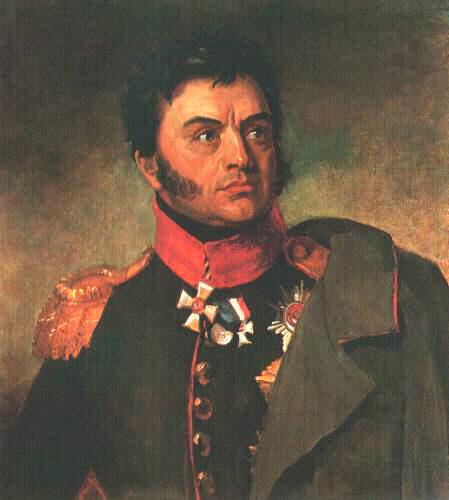 Nickolay Nickolaevich Raevsky, Russian General of Cavalry, a hero of the war of 1812.

He began his military service very early and in the age of 20 for his military merits was promoted to the rank of Colonel. He took part in wars with Turkey, Poland, Persia and afterwards with France (1805-1807) and Sweden (1808-1809).

In the Russian-Turkish war of 1806-1812 he commanded a Corps and distinguished himself in the siege of Silistria.

The military skills and courage of Raevsky became apparent show best of all in the war of 1812. On July,23, 1812 in the battle at Saltanovka village to the South of the city of Mogilev the children of Raevsky took part too.

This battle was described by his grandson N.M.Orlov. "Nickolay Nickolaevich took his two sons to the Army with him. The older son, Alexander, was 16 and the yonger, Nickolay, was only 11. And these teenagers served to the Fatherland in the age when children usually sit at desks in school. In the battle at Saltanovka they were with their father.

In the moment of the offensive attack to the French batteries Raevsky took them with him in at the head of the column of the Smolensk regiment, and he led by the hand his younger son Nickolay... The heroic example of the commander and his sons filled the troops with enthusiasm the soldiers who had lingered under the enemy case-shot, rushed forward and overrun the enemy"

Owing to the courage and fortitude of Raevsky's soldiers the Army of Bagration was able to cross the Dieper without losses and came to Smolensk.

At Smolensk Raevsky commanded the 7-th Army Corps. On August,4 he for twenty four hours together with the 27-th Division of General D.P.Neverovsky defended the city heroically against the outnumbered enemy forces.

In the Borodino battle the 7-th Corps of Raevsky defended the redoubt that was attacked by the big French forces. This redoubt was called "The Battery of Raevsky".

Afterwards Raevsky fought very brave in the battles at Maloyaroslavets and Krasnoe.

In 1813 and 1814 Raevsky took part in many battles in the foreign campaign of the Russian Army.

After the war and coming back to Russia he commanded the 4-th Corps that was in the 2-nd Army in the South of Russia till 1825. There he organized for soldiers "the school of mutual education" in that the ideas of Decembrists were propagandized.

In 1826 he was recalled from the Army and he became a member of the State Council.

Both sons of Raevsky - Colonels Nickolay and Alexander and his brother V.Raevsky were involved in the case of Decembrists. Raevsky was very popular among Decembrists and they planned make him a member of the Temporary Government if there revolt would win.

Alexander Pushkin was a friend of the familiy of Raevsky, especially in the Southern exile of the poet (1821-1822).