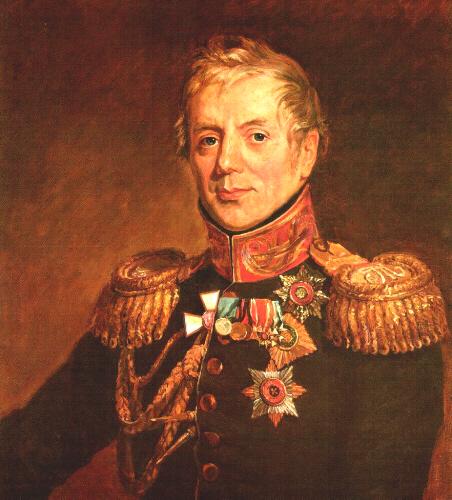 Petr Petrovich Konovnitsin began his military service in the very young age as the main part of Russian commanders. He participated in the Russian-Swedish war of 1788 - 1790 and in the Polish war of 1794 and was promoted to the rank of Major-General in 1797.

But after Paul's I coming to the throne he was dismissed and lived in his estate till 1806. In 1806 he was elected by St.Petersburg nobility the commander of the  "zemskoe voisko" (local militia). After the militia had been disbanded he was taken on military service again. In 1808-1809 during the Russian Swedish war he was a General Aide-de-Camp in the Russian Staff in Finland. He perfectly managed food provision of the Russian army .

In 1812 Lieutenant-General Konovnitsin commanded the 3-rd Infantry Division in the 1-st Western Army of Barclay de Tolly. He and his division distinguished in the battles of Ostrovno, Smolensk and Lubino (Valutina Hill). After the battle of Smolensk Konovnitsin was appointed the commander of the rear-guard of the retreating Russian army and ensured the successful retreat of the army in full order and taking its positions at Borodino.

In the battle of Borodino he temporarily commanded the left wing after Bagration had been mortally wounded. After Russian Army left Moscow he was appointed General Aide-de-Camp in Kutuzov's Staff and during staying of the Russian Army in Tarutino he fulfilled the duties of the Chief of Staff. He was on this post during all the period of the Russian Army counter-offensive.

In 1813 he was appointed the commander of a Grenadier Corps, but in the first big battle at Lutzen Konovnitsin was seriously wounded and quitted the ranks. After this he was at the court of Alexander I.

Konovnitsin's eldest son Petr Petrovich took part in the revolt of Decembrists, was prosecuted for it, degraded to the ranks and exiled to the Caucasus, where he died. Konovnitsin's daughter was Decembist M.M.Narishkin's wife and voluntarily followed her husband to the exile in Siberia.