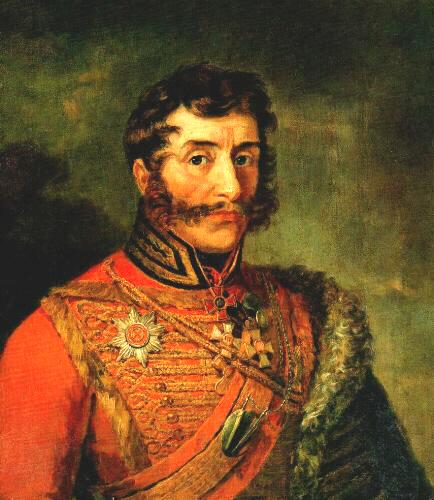 In the beginning of his career Ivan Semenovich Dorokhov studied in the Engineering Cadet Corps.

In the Second Catherinian Turkish War of 1787-1791 he distinguised himself in such battles as Fokshany and Rymnik.

In the Second Polish war of 1794 he was in Warsaw just in the time when the revolt broke out. Having only a company of grenadiers and 1 cannon he beat off the insurgents during 36 hours and then he had fought his way through crowds of enemies and joined the main Russian forces.

From 1803 Dorokhov was the chief of the Izumsky Hussar regiment.

In the campaign of 1806 - 1807 against Napoleonic France he distinguished in the battles of Charnova and Pultusk.

In the beginning of the war of 1812 Dorokhov commanded the van-guard in the 1-st Western Army of Barclay de Tolly. But during the retreat he was cut off from the main forces of the 1-st Army, in this situation he decided on his own initiative to fight his way and go to join the 2-nd Army of General Bagration. For some days he was in the middle of the French columns, but manoeuvring skilfully he could join Prince Bagration's forces.

He took active part in the battle of Smolensk. In the battle of Borodino he commanded a cavalry division that fought brave of Bagration's "fleshes" (earth fortifications).

After the Russian army had left Moscow Dorokhov formed a partisan detachment consisted of  gragoon, hussar and three cossack regiments. His detachment delivered some serious blows to the French troops on the road between Moscow and Mozhaisk. The most successful operation of Dorokhov and his partisans was taking the town Vereya where they captured almost all the enemy garrison. For this victory Dorokhov was rewarded with the gold sword with diamonds and inscription "For Vereya Liberation".

In the battle of Maloyaroslavets Dorokhov was seriously wounded in the leg.

Ivan Semenovich Dorokhov died in 1815 and was buried in the town of Vereya according to his will.