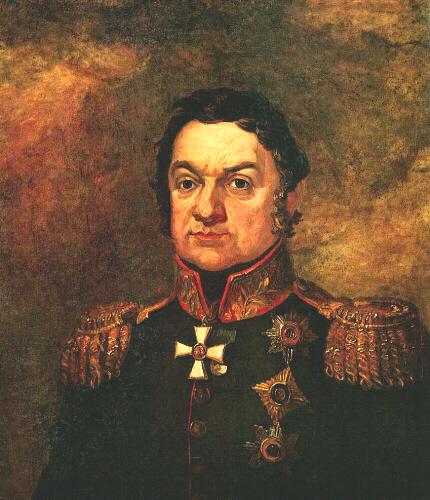 Dmitry Sergeevich Dokhturov was born in 1756 - the year of the beginng of the Seven Years War.
He took part in the Russian-Swedish war of 1788-1790 and during this war was wounded twice in the battles of Rochenshalm and Vyborg.

At the very beginning of the Napoleonic wars Dokhturov was one of the most popular Russian commanders.


In the campaign of 1805 Lieutenant-General Dokhturov crushed the division of Mortier at Cremse. For this victory he was rewarded with his first Order of St.George of 3-rd Class. When Napoleon knew about this bloody ballte and utter defeat of Mortier's troops he said only one sadly word "slaughter".

After it was Austerlitz, in this battle Dohkturov commanded the first column on the left wing. And the the remain of Allied Austrian-Russian Army owed him its rescue: he at the head of his column fought his way through the enemy lines and withdrew the troops that had been already considered lost.

In this action when Russian troops came to a dam where the artillery fire of many French batteries came together, Dokhturov seeing his troops might stop rode ahead directly to the crossing. His aides-de-camp were very worried and said to him:

- Your Excellency, please, don't do it, you have a wife and children...
- Here my wife is my honour and my troops are my children!
replied the brave general, unsheathed his gold sword given him by Catherine II and led his troops forward...

And not without reason soldiers called Dokhturov "the Iron General".

In the campaigns of 1806 - 1807 Dokhturov took part in the battles at Golym, Eylau and Friedland.

In 1810 he was promoted to the rank of General of Infantry.

In the beginning of the campaign of 1812 Dokhturov was the commander of 6-th Infantry Corps in the 1-st Western Army. He commanded Russian troops in the defence of Smolensk on August, 4 - 5 (16-17) and heroically repusled all attacks of Napoleonic troops and after it could withdrew his troops from Smolensk and join the main forces in full order.

In the battle of Borodino on October,26 (September,7) Dorokhov at first commanded the centre of the Russian Army and the he took the command of the left wing after Bagration had been mortally wounded. And he confirmed his reputation of "Iron Gereral" again: he could beat off all French attacks and stay on his positions. During the battle he appeared in the most dangerous places and inspired soldiers by his calmness firmness and calmness.

In the battle of Tarutino on October,6 (18) 1812 Dokhturov commanded the centre of the Russian army.

Especially Dokhturov distinguised himself in the battle at Maloyaroslavets on October,12 (24). He defended this town, during very hot fightings the town changed hands 8 times and at last Napoleon had to withraw his troops and was forced to retreat along the Old Smolensk road.

For his great services in this battle Dokhturov was rewarded with the Order of St.George of 2-nd Class.

In the campaigns of 1813 - 1814 Dokhturov participated in the battles at Drezden and Leipzig and then till capturing Paris he with his troops was in Germany.

When he was in Poland in 1813 he distinguished by his charity and helped a lot to families of Poles that were killed or captured, though he himself had not big incomes.

After returning Russian troops from the foreign campaign he retired and lived in Moscow. But his heatlh was ruined much and in 1816 Dmitry Sergeevich Dokhturov died.