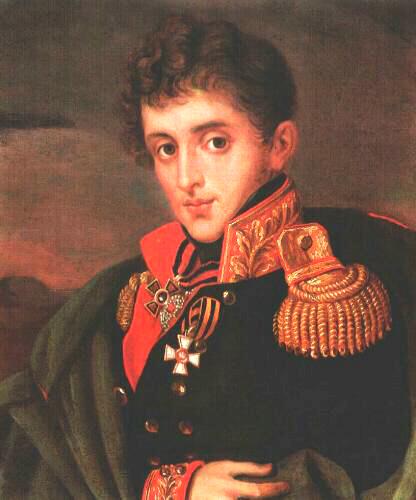 Alexander Alexeevich was the youngest (the 4th) from brothers Tuchkovs who took part in the Napoleonic wars.

He participated in the campaign of 1805 and after it in the war against Sweden.

In the war of 1812 he was a General and commanded a brigade in the 3-rd Infantry Division. He distinguished himself in the battles at Vitebsk and Smolensk in the detachment of his older brother Pavel Alexeevich.

In the Borodino battle he was the commander of the Revel regiment and was among the defenders of the Semenovsky (Bagration's) fleshes (fortifications).

In one of the attacks of the French he with a banner in his hands led his regiment into the bayonet attack under the enemy shot-cases and was killed in this attack.

Here you can see the portrait of this young brave general. Fedor Glinka, a participant of the war of 1812, wrote about him:

There is a soul in his features, especially in his eyes, his lips. You can imagine that a man who has them           has heart, imagination and can think and dream even in a military uniform..."


In 1820 on the place where Alexander Tuchkov was killed, his wife, Margarita Tuchkova built a church of Spas Nerukotvorny (Our Saviour).