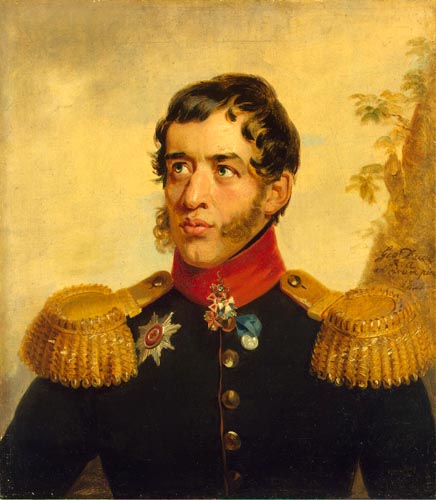 Prince Sergey Grigorievich Volkonsky was enlisted to military service when he was a child, he studied at home and then in the famous boarding-school of Abbot Nickola.

In 1805 he began his military service in the Kavalergard (Horse Guard) regiment and did the brilliant battle career; he took part in more than 50 battles, he was a General in the age of 24.

He took part of the battles at Preysish-Elou and Fridland.

In 1810 he, as a volunteer, participated in combats on the Danube river against the Turks, in the battles at Batin, Rushuk and Shumla, in 1810 he was in the staff of Kutuzov in the Dunay Army.

In 1813- 1814 he distinguished himself in the battles at Lutzen, Bauzen, Craonne was rewarded and got the rank of Major-General.

S.G.Volkonsky from 1819 commanded the 1-st Brigade of the 19-th Infantry Division, that was in the 2-nd Army. He lived in the South and became a close friend with the active members of the Southern secret society and very soon took one of the leading places there, he had wide connections and was very useful for connections with the others secret societies. In 1820-s Volkonsky married beauty Maria Nickolaevna, a daughter of famous general Raevsky. In 1824 Volkonsky with V.Davydov managed the activities of the secret society in Kamenka. In this year , after coming back from St.Petersburg, he told his friends about the situation in the Northern society and about its indecision. The views of Volkonsky owing to his closeness to the court, was known well to Alexander I.

After suppression of the revolt of Decembrists (December,14, 1825) Volkonsky was arrested and was sentenced to death, but the death penalty was changed to 20 yeas of servitude. He spent many years in jails of Chita and the Petrovsky plant.

His very young wife shared his detention with him, she was there together with the wifes of other Decembrists: Muraviova, Yushnevskaya, Trubetskaya and othes, They arranged the life of their exiled husbands and established connection with the living world.

In the beginning of 1840-s Volkonsky with his family made his home in Irkutsk and very soon their house became a centre of all local social life. And Volkonsky himself was reputed for his originality: he on his own money made his estate near the city and gave himself up to agriculture; he did a lot of work by his own hands was acquainted almost only with peasants and taught them many agricultural methodics. He was at home very seldom and for a short time, not changing his country way of life and image.

After the amnesty in 1856 Volkonsky came to Moscow, and there the old Decembrist turned into an educated aristocrat again, very kind and cheerful with the very clear spirit, although he didn't give up his agricultural hobby.

In 1860-s old Volkonskys lived in the Chernigov estate of their daughter, who was a wife of a rich man, Kochubey by name.