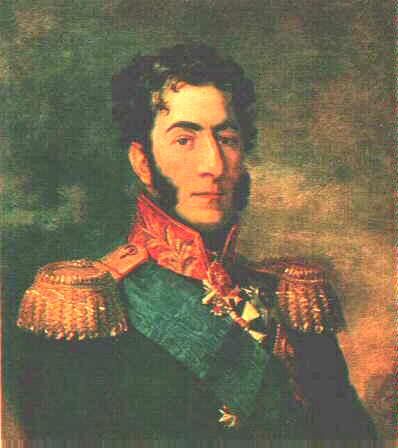 P.I.Bagration, a well-known Russian general, a participant of Suvorov's campaigns and the war of 1812, General of Infantry.

He was born in Kizlyar town in the family of a retired Colonel. He came from the very old family of Georgian Princes. His military service Bagration began in the age of 17 in 1782 as a sergeant of the Caucasian Musketeer regiment. In 1788 he took part in the assualt of Ochakov; and there attracted Suvorov's attention to himself. In the campaign of 1794 Bargation showed himself as a brave cavalry commander. Suvorov thought highly of his skills, bravery, enterprise and accuracy of his command, he noted at once his the military talent of the young officer. The military service under the command of Suvorov had big influence on forming of military skills of Bagration.

In the rank of General-Major Bagration took part in the Italian campaign of Suvorov in 1799. He commanded the vanguard of the Russian troops. He stormed and seized towns of Breshia and Lecco and executed the most important missions in the battles at Trebbia and Novi.

In the well-known Swiss campaign of Suvorov in 1799 Bargation commanded the Russian vanguard, he was the first who accepted the enemy blows when the Russian troops crossed St.Gotard, the Devil Bridge and others. Then during the retreat of the Russian Army he commanded the rear-guard, covered the retreat of the main forces and contained the attacks of the outnumbered enemy forces (the Panix mountain ridge). In the Swiss campaign Bagration was Suvorov's most reliable support.

In the Russian-Austrian-French war of 1805 Bagration showed himself as a talented commander of the rear-guard. At November,4 , 1805 Bagration distingushed himself in the bloody battle at Shengraben, where he with 6000 of grenadiers could resist agaist 30,000 of the French , covered the Russian Army from the Army of Napoleon numbered 200,000 and gave the main forces of Kutuzov to enter the Znaim road and join the auxiliary coprs. After this Bargation's detachment broke the enemy ring and joned the main forces.

Kutuzov payed high tribute to Bargation's services and in his report of November,7,1805 he called him his best assistant and promoted him to the rank of General-Lieutenant and rewarded him witn the Order of St.George of the 2-nd Class. The successful manoeuvre of Kutuzov and the heroic resistance of Bagration's rear-guard didn't let Napoleon defeat the Russian Army.

In the war against Sweden (1808-1809) Bargation commanded an infantry division and gained several victories (he seized Tammerfors, Abo and forced the Swedish out from the Southern Finland). In March of 1809 he commanded of a column of Russian troops in crossing the Gulf of Bothnia on ice to the Aland Islands and then to Sweden.

In August 1809 Bagration in the rank of General of Infantry was appointed the commander of the Moldavian Army acting on the Danube and gained several victories over the Turks. From 1811 he commanded the Podolsk Army that was renaimed to the 2-nd Western Army in 1812.

In the war of 1812 he commanded the 2-nd Western Army (48,000 of men) and under the strong onslaught of the outnumbered French forces could skilfully retreat to Smolensk to join the 1-st Western Army of Barclay de Tolly. Owing to Bargation's clever manoeuvre Napoleon could not defeat the Russian Armies separately.

In the Borodino battle in 1812 Bargation commanded the left flank on one of the most important positions - Semenovsky Fleshes (fortifications), and the main blow of the Napoleonic Forces was turned to them. Under the command of Bagration russian infantrymen and artillerymen defended the Fleshes heroically, they beat off seven attacks one after another. Each time the French streamed back sustaining heavy losses. The best troops of the French Army layed here. In the eighth attack Bagration was wounded very seriously: a shell-splinter splintered his left hip.

And even after if he continued to command and didn't leave the battle till the loos of blood had weakened him finally. He died on September,12, 1812 of this wound in Simy village in Vladimir gubernia. At July,5 1839 his remains were reburied in the Borodino Field near the memorial to the heroes of the war of 1812.

Bagration took part in many campaigns, wars and battles. For his courage, bravery and military skills he was rewarded with many Russian and foreign Orders and arms: the gold sword decorated with diamonds with the inscription "For courage".