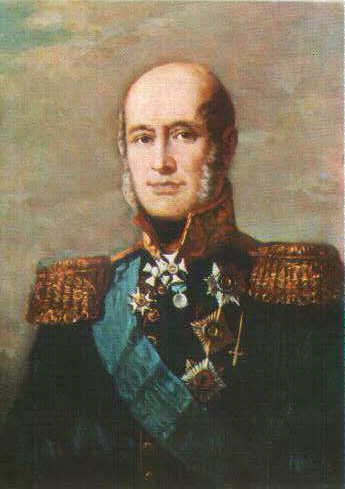 Michail Bogdanovich Barclay de Tolly came of a very old Scottish noble family, his ancestors moved to the city of Riga in Liflandia in XVII century. He was born in the family of a retired lieutenant in 1761.

In 1776 he was enlisted to military service in the Pskov carabineer regiment. (In Russia children of noble families were usually enlisted to some regiments in a very young age). Two years after he was promoted to the first cavalry officer rank - cornet.

He got ranks very slowly, in 1788 he was promoted to the rank of captain. From 1786 he was in the Finland Chasseur (Jager) Corps and was appointed an Aide-de-Camp of General-Lieutenant Prince Angalt-Bernburg.

First time he took part in military operations in the Russian-Turkish war of 1787-1791.

He served under the command of Prince Potemkin Taurichesky in the rank of second-major, he took part in the siege and assult of Ochakov in 1788 (December,6) and was rewarded with the Order of St.Vladimir of the 4-th Class and the Golden Ochakov Cross. (This reward was equated with the Order of St.George of 4 Class)

Next year (1789) Barclay distinguished himself in the actions near fortress Kaushany (September,13) and in combats at Akkerman and Bendery.

In the end of October 1789 Barclay went to St.Petersburg.


In 1790 Barclay de Tolly was transferred to the Finland Army and participated in the Finland campaign in the rank of major.
He showed himself as a talented and skilled commander. Then Russian troops had to fight against Swedish in Finland amidst huge forests, numerous lakes and small rivers, with the lack of roads. Barclay distinguished in the assault of Kerkinossky fortress (April,19) and was promoted to the rank of premier-major, then he arrived to the Tobolsk regiment.

In May,1791 Barclay was nominated to the St.Peterburg Grenadier regiment and was occupied with forming this regiment. On September,2,1791 he had married Eleonora von Smitten.


In 1794 the battalion of Barclay took part in supressing the armed revolt of Polish confederates and in the storm of town Vilno. Barclay was rewarded with the Order of St.George of the 4-th Class, he also participated in the capture of Prague and Warsaw and got the rank of Lieutenant-Colonel. During this campaign young infantry battalion commander Barclay showed himself as a brave officer and master of manoeuvres.

For 9 years of his successful commanding of the Jager regiment Barclay gained wide experience and showed his outstanding abilities, that have not stayed unnoticed. General Field-Marshal and excellent diplomat Prince Repnin once said about Barclay:

"Remeber my words: very soon this general will be great and well-known!"

The epoch of wars between Napoleonic France and Russia that began in 1805 brought to very big changes in the Russian Army and exposed many talented generals.

In the beginning of the campaign of 1805, the 3-rd Jager regiment of Barclay de Tolly was a part of the 2-nd Army of Bennigsen, that was to move to support the main forces of Austrian-Russian army. But on their way through Prussia they got the news about the defeat of the Allied army at Austerlitz and break-down of the Third Coalition. The military actions had been stopped in a short time.

In September of 1806 the Fourth Coalition against Napoleonic France was formed. After defeat of the Prussian army at Jena and Auerstaedt the Russian army of General Bennigsen was to play the main role in this campaign. The army numbered 70 thousand men and 300 guns.

Barclay commanded the advanced detachment in Plotsk and organized pickets on the Western bank of Vistula river in permanent affairs with the enemy. On December,12 the first skirmish with Augerau troops happened. In the battle of Pultusk (December,14,1806) Barclay was on the right flank with three jager regiments, the Tenginsk musketeer and the Polish Cavalry regiments. He stood the fierce attacks of the French columns and made bayonet counter attacks. For this battle he was rewarded with the Order of St.George of the 3-rd Class.

In the beginning of 1807 Barclay was appointed the commander of the left wing.

In combats at Yankovo and Landsberg (January,12-22,1807) Barclay acting along stood the pressure of almost the whole Army of Napoleon and could give an oppotunity for the main Russian Army of Bennigsen to gather at Preussisch-Elou, thought his troops suffered terribly.

On January,26-27 Barclay defended this town with fortitude from the desperate French attacks, he was seriously wounded in the arm and then taken to a hospital in Memel.

In the beginning of April Emperor Alexander I visited Barclay in the hospital in Memel. Barclay was rewarded with the Order of St.Anna of the 1-st Class and the Order of St.Vladimir of the 2-nd Class.

In the end of April, 1807 Barclay was nominated the commander of the 6-th Division and he was promoted to the rank of Lieutenant-General. In summer of 1807 Barclay went for treatment to St.Petersburg.

In May, 1808 Barclay was appointed the commander of the Detached Expeditionary Corps and sent to Finland to take part in the war against Sweden. He fought actions very successfully and on July,7, 1808 took Kuopio town. In June-July Barclay with a big detachment came to the aid to the Division of General N.N.Raevsky.

But in the end of summer because of his ailment Barclay had to leave his Corps and went to St.Petersburg again. Emperor Alexander I appointed Barclay a member of the Military Council. And in March of 1809 Barclay came back to Finland as the commander of the Vassk Corps.

On March, 7 -9, 1809 the Russian Army in accordance with Barclay's plan crossed the Gulf of Bothnia on the ice and came to Umeo town. When the Russian vanguard was about 1 verst (3500 feet) far from Umeo, an envoy arrived from the Sweden Commander-in-Chief with the offer to begin parley. Barclay demanded that Swedish Commander-in-Chief Count Cronstedt himself would come to his Headquarters and ask him to stop the military actions.

Barclay could win the brilliant victory very easy but he decided to give up his own glory to achieve his object without much of blood.

In according with terms of peace concluded with Count Cronstedt, Umeo town and a region of Sweden that formed near 1/3 of the whole Swedish Kingdom were ceded to Russia.

For this campaign Barclay was appointed the Commander-in-Chief of the Russian Army in Finland and the General-Governor of Finland (May,29,1809).

In the beginning of July, 1809 Alexander I visited Finland and met with the General-Governor.