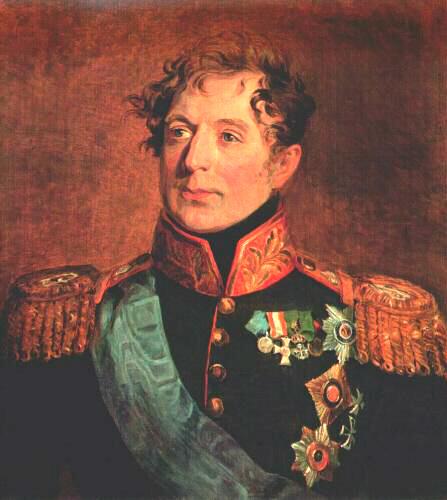 General of Infantry Michail Andreevich Miloradovich began his military service under the command of Suvorov. He was one of the young associates of the great Russian general, such as Bagration and Gorchakov.

Miloradovich took part in the Austerlitz battle in 1805. In the campaign of 1805 he fought very successfully in co-operation with General Bagration against the cavalry of Marshal Murat and the Grenadier Coprs of Marshal Oudinot during the retreating manoeuvre of the Russian Army.

In the Russian-Turkish war of 1806-1812 Miloradovich commanded the Corps that on December,13,1806 liberated Bucharest from the Turks. In March of 1807 he defeated Turks at Turbat and on July,2, 1807 after the battle at Obelishty made to retreat the Turkish army of Ali-Pasha of 12 thousands.

After this war he was appointed the Governor of Kiev in 1809.

In the war of 1812 he arrived to the Army with 15 thousands of reinforcement on August,15,1812. In the Borodino battle he commanded the right wing of the Russian Army that covered the road to Moscow and then the centre of the Russian Army.

After this battle he commanded the rear-guard of the Russian Army. When the Russian Army retreated from Moscow he offered Marshal Murat to conclude a truce to give the Russian troops an opportunity to leave Moscow in order, otherwise he promised to fight to the last soldier. The truce was concluded.

During the offensive of the Russian Army he commanded the van-guard of the main army. The Russian troops under his command won the battles at Viazma and Krasnoe.

Miloradovich took part in the campaigns of 1813-1814 . In the battle of Leipzig in 1813 he commanded The Russian and Prussian Guards.

In December of 1825 some officers with their regiments rose in rebellion against new Emperor Nickolay the I-st. It was the revolt of Decembrists. They with their regiments stood on the Senatskaya Square near the Winter Palace. Nickolay sent Miloradovich to the rebellious soldiers to induce them to go away. He came to them unarmed, but was mortally wounded by one of the rebels Kahovsky by name.