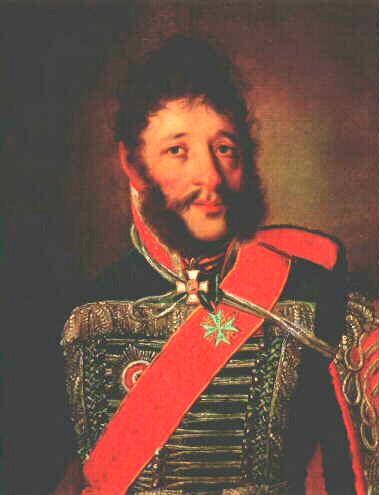 Jacob Petrovich Kulnev got his baptism of fire in the Russian-Turkish war of 1787-1791 at Bendery fortress.

In 1794 he fought in Poland under the command of Suvorov. He was true to Suvorov's traditions all his life. After the Polish campaign he was promoted to the rank of Major and transferred to the Sumskoy Hussar regiment.

And only after 8 years Kulnev, transferred to the Grodno Hussar regiment, took part in a war again. In was in 1807 in the Eastern Prussia, he took part in the battle at Fridland and after it got the rank of Colonel.

In the Russian-Swedish war in Finland he distinguished himself as a brilliant cavalry commander. In one of affairs he took prisoner the Chief of the Swedish Staff General-Aide-de-Camp Count Levenhelm.

He got the rank of Major-General. In 1810 he successfully fought against the Turks on the Danube, at Shumla and Batin.

In the beginning of the war of 1812 he commanded the Grodno Hussar regiment. This regiment was in the Detached Corps of Wittgenstein.

During the retreat of Barclay de Tolly's Army he scattered two cavalry regiments, took more than 100 prisoners and a Brigade General among them. On July, 13 he took prisoners several hudreds of French.

On July,19 in the battle at Klyastitsy Kulnev commanded the vanguard of Wittgenstein's troops, he captured about 900 prisoners and the transport of Marshal Oudinot. Next day he joined battle with unequal enemy forces and was mortally wounded by a cannon-ball.

When Kulnev was dieing he said to his soldiers: "Friends, don't cede to the enemy a single step of Russian land. Victory is awaiting you!"

The hero was buried on the bank of the river Drissa, not far from his birth-place.

After knowing about his death, Napoleon wrote to France : "General Kulnev, one of the best officers of the Russian cavalry was killed".

J.P.Kulnev was the first Russian general killed in the war of 1812.