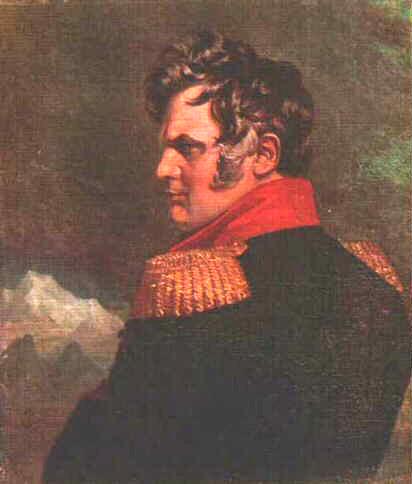 General of Artillery and Infantry, a companion-in-arms of Suvorov and Kutuzov, a hero of the war of 1812, a well-known general and diplomat.

He began his military service in Atrillery under the command of Suvorov. Ermolov took part in combats against the French in Italy and in the Persian campaign of 1796.


Because of his sharp opinion about his commanders and the arrest of his relative Ermolov was put into fortress and in 1798 he was exiled to Kostroma, but in 1801 after the death of Pavel I, he was returned to military service again.

He took part in the war against France in 1805-1807. In 1809 he commanded the detachment of reserve troops and protected the South-Western borders of Russia, in 1811 he was appointed the Chief of the 3-rd Western Army Staff and after the Borodino battle he was the Chief of the united Staff of the 1-st and 2-nd Armies.

During the retreat of the Russian Armies to Smolensk he took part in the battles at Vitebsk and Smolensk.

In the Borodino battle he by himself led the troops to the attacks against the French occupied the positions of Raevsky's battery. When Napoleon's Army retreated from Moscow, Ermolov under the order of Kutuzov intercepted the roads to Kaluga and sent the Corps of Dokhturov to Maloyaroslavets, and as a result, Napoleon was made to retreat along the old devastated Smolensk road.

In the foreign campaign of the Russian Army in 1813 Ermolov was the commander of Artillery of all acting armies, in seizing of Paris he commanded Russian and Prussian Guard Corpss.

From 1816 Ermolov was the Commander-in-Chief in the Caucasus, the commander of the Detached Geogian Corps and in the same time the Russian Ambassador Extraordinary in Persia. Ermolov founded many fortresses on the territory of the Eastern and Western Caucasus, he made many military expeditions to ensure the peaceful development of trading connections in the Caucasus and to reinforce its Eastern and Southern borders.

In 1826 Ermolov successfully repelled the Persian invasion into the Transcaucasian territories and organized the defence of new joined provinces. In his military activities he successfully used the methods and ideas of Suvorov and Kutuzov, he was very popular among soldiers and officers; he protected many people who was exiled by Tsar to the Caucasus, amond them there were many Decembrists. The Decembrists in their plans expected Ermolov's support of their military coup d'etat.

In 1827 Nickolay I dismissed Ermolov. In 1853 Ermolov was elected by Moscow nobles the commander of the Moscow militia, but the old general was unable to take part in the Crimean War.