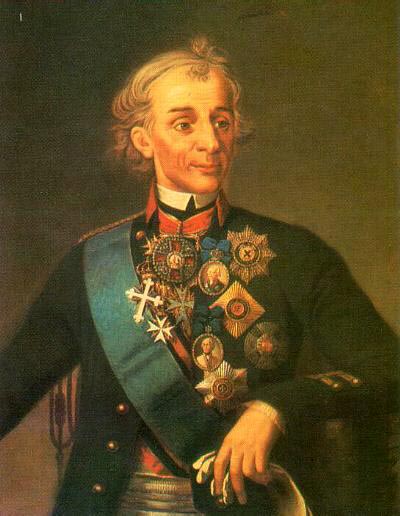 Alexander Suvorov was born in the family of General Vasily Ivanovich Suvorov.
He came of a very old Russian noble family. One of his ancestors was Mikhail Ivanovich Suvorov that served in the Russian Army during the reign of Tsar Ioann (Ivan) the IV-th (the Terrible). His father Vasily Suvorov was a batman of Tsar Peter the Great and his Aide-de-Camp in real.

By order of Tsar Peter he translated into Russian a book by famous French engineer Vauban that was published in St.Petersburg under the title "The Methods of City Fortifying". After the death of Peter the Great Vasily Suvorov was transferred to the Leib-Guards Semenovsky regiment that was located in Moscow from 1728. Afterwards he became a member of the Russian Senate. Also he was the author of the first Russian military dictionary. He began to teach his son Alexander the principles of Artillery, Fortification, Military History from the very young age.

In 1742 Alexander Suvorov was enlisted to the Lifeguard Semenovsky regiment as a private of musketeers (in excess of the staff and without salary).


In 1754 he got his first officer rank - lieutenant and was appointed to the Ingermanlandsky Infantry regiment.

Suvorov got his baptism of fire in the Seven Years War of 1756-1763. In the beginning of this war he was in the rear in commissariat service. He was promoted to the rank of Lieutenant-Colonel and transferred to the Kazansky Infantry regiment.
In 1759 Suvorov became an officer of the Russian Army General Headquarters and got the post of "general and division officer of the day".

Several times Suvorov distinguished himself in reconnaissance actions. He took part in the battle of Kunersdorf with the Prussian Army and in the capture of Berlin by Russian troops.
In the very young age Suvorov displayed his talent for command and abilities to lead the soldiers into battle.

In 1761 Suvorov already commanded a detached force that helped General Rumyantsev's Corps to capture the port city and fortress of Kolberg (Kolobrzeg) in Pomerania. Then he temporarily commanded the Tverskoy Dragoon regiment that distinguished in Prince of Wurtemberg's troops pursuit. After this for some time Suvorov commanded the Arkhangelorodsky Dragoon regiment.

The Seven Years War gave the future great Russian commander the rich military experience and he learned much about the Russian Army military and moral potentialities.

In August of 1762 Colonel Suvorov became the commander of the Astrakhansky Infantry regiment. Then from 1763 to 1769 he commanded the Suzdalsky Infantry regiment that was billeted in New Ladoga. In this period he wrote his well-known in the Russian Army "Regimental Instructions" (or "Suzdal Regulations") that contained the main rules and regulations of soldiers training and internal service and battle training. Under Suvorov's command the Suzdalsky regiment very soon became one of the best in the Russian Army.

In 1765 Empress Catherine the Great (the Second) personally took part in the manoevres near the Krasnoe Village just with the Suzdalsky regiment, and she especially distinguished the soldiers under the command of Suvorov.

On September,22,1768 Suvorov was promoted to the rank of brigadier.

In 1768 - 1772 in the period of the first division of Poland Suvorov with the Suzdalsky regiment took part in the military actions in Poland fighting against the troops of the Polish Confederation.

The Confederats fought against Polish King Stanislaw Poniatowski that was supported by Russia.

In this campaign Suvorov commanding a brigade and separated detached troops made swift movements and gained many victories often having much lesser troops than the Confederates.

In 1770 Suvorov got the rank of Major-General.

The military operations in Poland made Suvorov well-known in the Russian Army and Empress Catherine saw the future Great Commander in him.

Suvorov was rewarded with the St.George Order of 4-th Class.

After this Polish campaign in 1773 he was transferred to the acting army at his own request.

Major-General Suvorov was appointed to the 1-st Army of General-Field-Marshal Rumyantsev and got a detachment to command.

With this detachment he made two very successful raids to the Turkish territory and defeated the big Turkish forces at Turtukay in 1773 (for this victory he was rewarded with the St.George Order of Second Class at once passing Class 3).

In the battle of Kozludgi (on the territory of modern Bulgaria, now this village is called "Suvorovo") on June,9, 1774 Lieutenant-General Suvurov smashed the Turkish army 40 thousand in number under the command of Sultan's General Abdul-Rezak.

This defeat made Turkey to make the Kuchuk-Kinargi peace with Russia.

Emelian  Pugachev  was a Don Cossack, he had fought in several wars. In the autumn of 1773 he lead the Ural Cossacks in a revolt which soon was to spread into the Volga basin. He later claimed to be Peter III., the deceased husband of Catherine the Great.

At that time, Russia was at war with the Ottoman Empire, the Russian troops thus had been moved from the area where the rebellion broke out; they were concentrated on the front to the Ottoman Empire. In Russia there was widespread dissatisfaction.

Pugachev capitalized on political dissatisfaction by passing a number of reforms - he had established a kind of alternative government, with chancelery. Among those reforms were the liberation of the serfs, the abolition of taxation and military service, he promised to abolish the landlords. In accordance to tradition, Pugachev claimed to be Catherine's murdered husband Peter III.

Pugachev's troops consisted of cossacks disgruntled about the abolition of their organization, peasants angry about the worsening of their condition, of ethnic minorities (Bashkirs etc.) upset about the infringement on their lands by the Russians, of Old Believers rejecting the state interference in church affairs. Yet the force lacked experienced military leaders and acted very undisciplined like hordes of mongols.

Early in the rising the Russian administration, the political centers of Moscow and St. Petersburg, seemed almost paralyzed, unable to react on the rebellion. Yet Pugachev took Kazan, but failed to attack the centers. In 1774 an army moved against him, defeated Pugachev's forces repeatedly. Pugachev was betrayed by his own men.

In August of 1774 Suvorov was sent to supress Pugachov's revolt, but the main rebel forces had been crushed by the troops under the command of General Michelson before Suvorov arrived. Pugachov retreated to steppes over the river Volga with the remainder of his forces. Suvorov followed him.

On September,26 some rebels commanders took their tied up leader to Suvorov in Yaitsky village hoping to pay off by his head. Suvorov made the first interrogation of the impostor and then conveyed him to the town of Simbirsk. After a short time Pugachov was taken to Moscow and executed there.